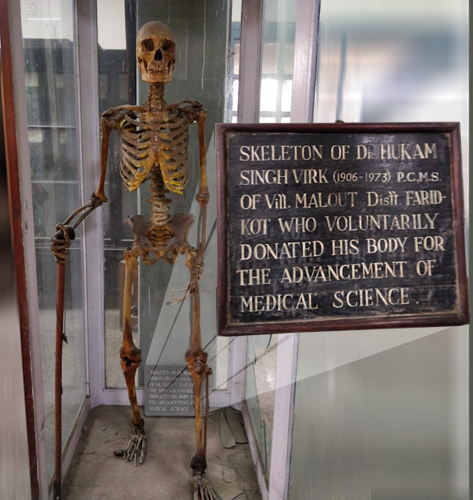 Around 30 years back, I had an opportunity to visit the Anatomy Department of the Government Medical college, Amritsar. There I noticed the preserved skeleton of the Ex- Head of Anatomy department in the Glass Box. On my inquiry, I learnt that he had donated his body, after his death, for the medical students to study the human anatomy. On returning to Delhi I came to know that the subject of Anatomy in medical colleges is taught on a dead body (cadaver) to understand the structure of Human body. But there is an acute scarcity of the cadavers and 40 to 50 students learn on a single cadaver whereas it should not be more than 4-6 students for a thorough knowledge of the subject.

After discussions with my friends, five or six of us went ahead to register our will to donate our body after death. After registering the will I felt as if I was not the owner of the body but just it’s trusty. That was truly a spiritual experience. During my days as a Member of Legislative Assembly, Delhi, I got eye flu while supervising the relief work during floods in Delhi. Being extremely busy, I could not get time to see a Doctor. Then my father advised me that you have taken pledge to donate body after death and you are just utilising this body during your life time, thus it is your moral duty to keep yourself healthy so that this body is useful for the medical students for studies.

When our pledge came to the notice of respected national saint Shri Nanaji Deshmukh, he desired making arrangements for his body donation also. After discussion with friends “Dadhichi Deh Dan Samiti” came into existence as a registered society in 1997. During my tenure of twenty years as President, I recall many heart touching experiences. A very very senior officer of the Indian Army along with his wife took voluntary decision to donate their bodies after death. After his death, his wife very respectfully set aside stern resistance from her son in law and executed the will of her husband to donate his body to a medical college.

Likewise, I recall that one south Indian sister had lost her Husband in a very young age in an accident as he was declared brain Dead. She was all alone in the hospital with two small kids along her side. On being requested by the doctors for organ donations from her brain dead husband, she took a very brave decision to donate his Heart for transplantation. This heart transplant gave new lease of life to a person. Years later, she was invited to a marriage ceremony in the family of that heart recipient. She was trying to avoid the holy ceremonies. The host noticed her absence and enquired for the reason. She hesitantly conveyed that being a widow, her presence in the pious ceremonies may be a bad omen. Host went out, stopped the ongoing ceremonies and told her that the ceremonies will resume only if his brave heart saviour sister will participate in all the marriage ceremonies. In short, it surely reflects that body and organ donation are receiving acceptance but the destination is still quiet far.

To raise the awareness and acceptance of this noble cause we requested the Hon’ble President of India, Shri Ram Nath Kobind, to preside over our function and bless us. He invited Samiti to organise the function in Rashtrapati Bhawan itself. The function held in the President’s House on 10th Nov 2017 witnessed the release of samiti’s, probably India’s first book, on “Body and Organ Donation” written by shri Arun Anand, published by Bharat Prakashan, and released by Dr. Jitender Singh, Minister of State in Prime Minister office and the first copy was presented to Hon’ble President.

During this long journey of twenty years, gradually about 1000 volunteers have committed themselves fully in words and deeds, and are contributing to the best of their means selflessly. With the unconditional support from all of you, our dream to realise Vedic Mantra” Sarve Bhavantu Sukhin”, may deem difficult but not impossible. I call upon you all to come forward and contribute in this spiritual pursuit for Humanity with your full potentials.